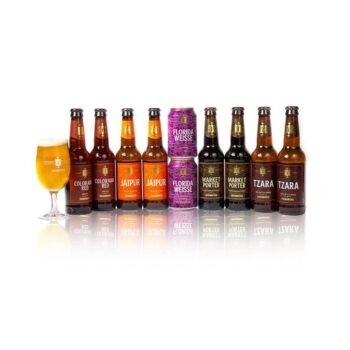 This mega mixed case contains 6 carefully selected beers from award winning Green’s Gluten Free Brewery with a range of styles and flavours that will cater for any gluten free preferences. Treat your loved one and introduce them to their new favourite beer or indulge yourself on this delicious selection of Beer.

Want this to arrive in a Gift Box? Select Hoppy Christmas Gift Box at checkout and up your gifting game. (This is packaged with a hidden plain outer box to keep the surprise for gifts this Christmas.)

In 1988 Derek Green had a problem. He had to avoid the gluten in barley and wheat, and at that time in the UK- indeed Europe – there was no gluten free beer available. A miserable life without beer lay ahead. The breakthrough came in 2003 when he met an eminent Belgian professor of brewing whom by coincidence had a daughter who also needed to avoid gluten, and there began a relationship with the mutual goal of brewing a beer made from alternative grains to barley, one that would be naturally gluten and wheat free. After numerous trials, in May 2004 Green’s launched the UK’s first ever Alternative Grain and naturally gluten free beer; named not surprisingly ‘Discovery’.

Please note we want to get beer to you as fast as possible so in the event that we run out of a particular beer, then we’ll substitute it for one of equal or higher value. Beer shown is representative only of beer in the case.